The following article was taken from the March 16 2001 edition of the Malaysian Times, Malaysia. 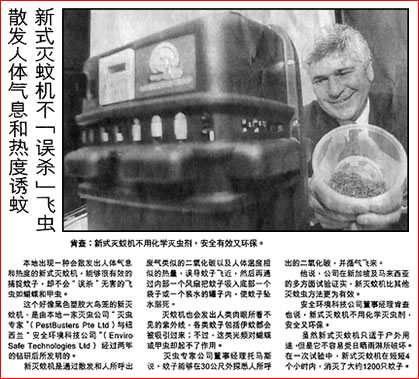 New innovative mosquito trap which emit human body heat and carbon dioxide exhale not only trap mosquito effectively and not killing beneficial insects such as butterfly and beetles.

New innovative mosquito trap which emit human body heat and carbon dioxide, deceive the mosquito from flying near and then the built-in fan will suck the mosquito into a bag, or water filled bottle which will eventually drown the trapped mosquito.

Mosquito trap also emit UV light, which is not visible to human, which will attract mosquito including Aedes, but this ray will be harmless to butterfly and beetles.

The company has tested the trap in several field tests, both in Singapore and Malaysia and has proven that this mosquito trap is more effective than any other method of mosquito control.

EnviroSafe Technologies Ltd Managing Director Ken Child added that such trap is not using any insecticide, which is safe and environmentally friendly.

The new mosquito trap is suitable for outdoors but they are not easily damaged - weather shield. In one of their field test, they managed to eradicate 1,200 mosquitoes within a short period of 4 hours.